I'm about to start streaming Risky's Revenge on Twitch! Give it a watch, tell your friends! It's my first livestream, so bear with me. XD

EDIT: I had planned for this to be a once-weekly thing, but I'm having so much fun with the game, I will be streaming again at 12:00 noon PST today! (I might as well get in some extra streaming/recording anyways because I will be on vacation in Hawaii all next week.)

Also, if you miss any of my streams, I'm also cutting the stream footage into a Let's Play format. http://m.youtube.com/user/ErdrickHero The first episode is up on YouTube already, but it's a bit rough. Due to some technical problems, my channel intro is not ready yet, so it kind of jumps right into the recording. Also, my voice audio clips occasionally. Unfortunately I didn't know about the problem until after the stream, I had asked my viewers if my voice sounded alright, and the only person who replied said it was fine. The problem should be fixed starting with today's stream though! 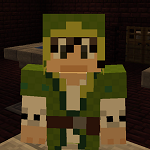